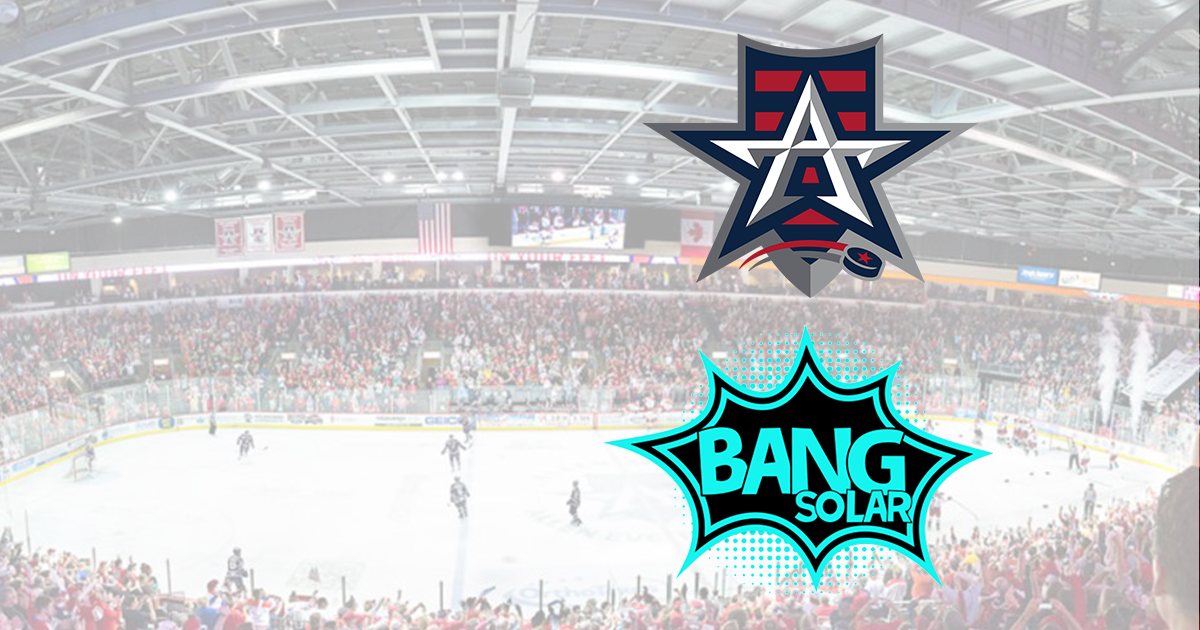 ALLEN, TX — December 28, 2020 — The Allen Americans, ECHL affiliate of the Minnesota Wild, are excited to announce a new sponsorship alliance with Bang Solar, the one-stop shop solar installer for residential and commercial clients.

“The Allen Americans are excited to align our organization with a creative, engaging partner in Bang Solar,” Americans Team President Mike Waddell said. “From our very first meeting in August, Bang Solar’s commitment to detail, value and service was readily apparent. The level of engagement they have with their customers will be felt by everyone associated with our club, from season ticket members, to other partners, and especially with the members of our team.”

One of the signature elements of the new partnership is a complete overhaul of the Americans’ team lounge, renamed the “BANG ROOM,” which has been optimized with cutting-edge technology and a host of creature comforts to make the “Men in Red” feel at home inside the team suite.

“It was obvious to us that a partnership with the Allen Americans was a no brainer,” Bang Solar Co-Founder and President Adam Foley said. “Being a solar power company, we felt this partnership was a perfect way to be closer to our community, be able to give back to people in our community, and bring all the energy possible to the club. The club is truly a class act and allows us to stick to our 4 C’s ( Client, Company, Community, Culture). I can’t think of a better group to work with, and we believe our goals are identically aligned. We know there is so much to come from this partnership and we are excited to watch the organization grow. “Bang Bang”

Another all-new, innovative game-day experience will be the “BANG ZONE,” a designated area on the boards where FANS WIN PRIZES from Bang Solar every time an Allen opponent is checked into the black & teal branded dasher boards in the rink’s corners. These areas connect directly to the Bang Solar Check Of The Game, which will help this in-game element live on after each game as Americans Social Media Channels will showcase the top Americans’ check of an opponent in a quick-paced montage of bone crunching checks.

All of the Americans’ player interviews this season will be presented by Bang Solar, as one of their main reasons for getting involved with the team is to make the iconic “Allen Player Experience” the best in the ECHL.

Additional “action” signage includes the newly named “Bang Solar Bench Box,” as well as on the Americans’ team entrance tunnel. A host of multimedia placements in the play-by-play coverage of all home and away games through the broadcast talents of the “Voice of the Americans,” 12-year veteran Tommy Daniels.

The Allen Americans are the ECHL affiliate of the National Hockey League‘s Minnesota Wild and the American Hockey League‘s Iowa Wild. Championship Hockey is the backbone of the American’s franchise since being founded prior to the 2009-10 season, with the Red, White and Blue having captured two ECHL Kelly Cup Championships (2014-15 & 2015-16) and two Central Hockey League President’s Cups (2012-13 & 2013-14). Americans’ home games are played at the Allen Event Center, which is located in The Village at Allen. Owned by nationally respected “Serial Entrepreneur” Jack D. Gulati, the Club is in its 12th season of professional hockey. Tickets are on sale now at AllenAmericans.com/tickets or by calling 972-912-1000.

Bang Solar believes in a future where you can own your electricity instead of renting it, getting the power you need without overpaying and overusing. They offer you the opportunity to take control of your finances when it comes to your electricity. Bang Solar takes a comprehensive approach to your home solar analysis to design a solar panel system explicitly tailored around your home and energy needs. At Bang Solar, it’s not a company driven by money but one that is driven by passion; passion for community, customers, and employees.